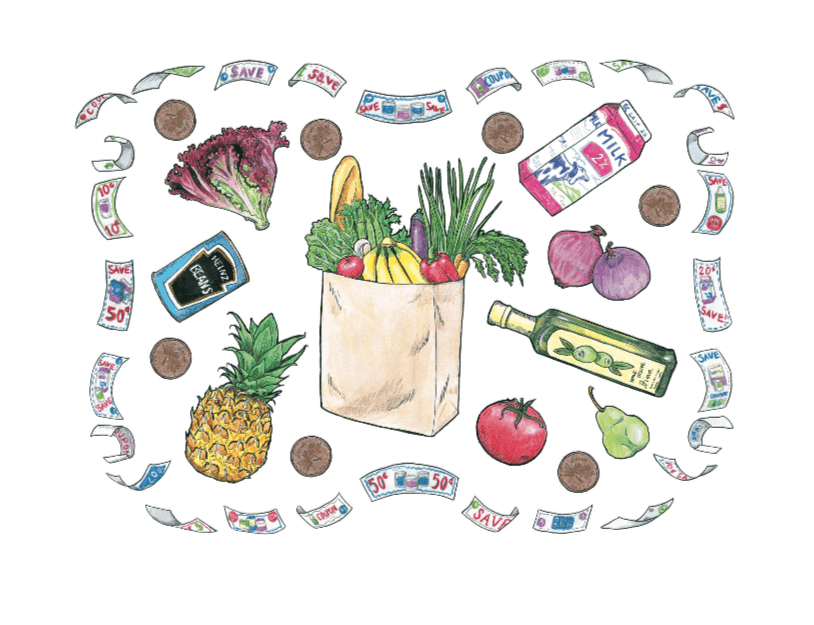 Monday evenings at FreshCo always carry an air of anxiety, but one particular evening was accented by a white couple with Apple watches. They were behind my mother and I in the checkout line, leaning against the conveyor belt and communicating through grimaces. Every time the woman sighed, my stomach tensed. The tension was three-fold, consisting of my social anxiety, my assumption that we look like fools, and the whiteness of the couple. They looked like the kind of couple that drive a Honda Civic and live in a studio apartment downtown. They looked nice enough, like the Game of Thrones smiling-Daenerys meme.

My mother grouped items by store. Most were to be price-matched from No Frills, some from Food Basics, and one from Walmart. The vegetable oil was the best deal from No Frills, almost half-off. Other things like a pineapple, onions, black beans, and lettuce were a difference of a dollar or a few cents. But it made a difference; I get that now more than ever. A couple dollars can be the difference between paying rent and not paying rent. Having something small to save, and having nothing. When I was younger I’d be frustrated hopping from store to store just to save a couple dollars because I didn’t understand the cumulative effects of it. I also figured there was no point expending that extra labour. I haven’t quite cancelled that argument yet, but I’m willing to concede for the time being.

It was work for my mother, going through all of the flyers and comparing prices across the board. It’s work to stand in the line and point to each item. It takes energy to wait and be waited on. My social anxiety always frames my identity in terms of other people. I figure we must look like a poor single mother with her 13-year-old daughter (I look a lot younger than I am), trying to scrape by as best we can with a batch of flyers and time on our hands. Some of that is true, but thinking about it uses energy too. The tension comes when I feel like my mother and I have to prove ourselves. If I wanted to, I could explain our entire life story to the woman’s impatient partner.

I would stick some stats in there for the sake of science. According to research by the Canadian Women’s Foundation, South Asian women make less than half the amount of what South Asian men make. Racialized single mothers in Canada are more at risk of poverty than single dads and nuclear families.

But survival is not about knowing those stats. My mom kept the anxiety of falling into poverty in the back of her mind when she became single over 18 years ago, but she pushed through. It was even harder because, due to her financial dependence on my father, she held little of her own monetary agency. We moved from place to place, trying to find something that fit our needs and that wasn’t over budget. South Asian communities like ours make up 19 percent of the population of low-income neighbourhoods in Toronto.
We moved to Parkdale over 10 years ago, when South Asian and Indo-Caribbean communities visibly populated apartment complexes. Though there are still many of these people left, there are also a lot more white middle-class families inhabiting houses and renovated apartments. We were lucky to move into the neighbourhood when we did, locking into a cheaper rental unit before gentrification jacked up the housing prices and overpriced vegan stores created the exclusive culture of “Vegandale.”

I’m the people-watching type, especially when shopping. When I watch certain people grocery shop, I can see how little attention most pay to choosing the perfect vegetables and fruits. I see it when I grocery shop with my middle-class friends. From what I’ve observed, middle-aged women of colour almost always spend more time picking out grocery items. My mom is always extra focused, because she is so keen on getting the most for her dollar. She often gets me to check for spots of mould on fruits, read ingredient labels, and double-check expiry dates.

Most single dads (and, of course, men in general) work and earn more than single moms. This is true for my father as well, who provided me with a different perspective on finance. He also possesses that Indo-Guyanese vigilance with his money, but it’s because he works a well-paying job and has an abundance of funds to invest. He’s never price-matched. Once, we went to No Frills together and the woman in front of us at the checkout was price-matching a few items. My dad grew impatient, shifting from foot to foot, like a bull before it charges. It was then I realized he’d never had to think about price-matching. If he really needs something it doesn’t matter if it’s on sale. He values quickness over a few dollars in savings, and that quickness is something many can’t afford when budgets are tight.

Living in Doug Ford’s Ontario is becoming increasingly precarious for the lower-middle class. OSAP’s tuition grants were the only way I could afford to go to university in the first place, and now, for many, those grants are halved. Ford’s wage freezes for public sector workers deeply impact communities like mine and families who are already struggling to support themselves. On top of this, grocery prices are climbing, with an up to 3.5 percent total increase in food prices expected in 2019, according to Canada’s Food Report, put together by Dalhousie University and the University of Guelph. The rising cost of vegetables is particularly concerning for me and many families that want to eat healthily. Many provinces, like Ontario, are also facing a projection of above-average food price increases this year, with Ontario seeing the highest increase so far at 2.7 percent. With significant cuts and freezes, it’s going to be even more important for my mom and I to save where we can.

The older I get, the more anxiety I face when shopping. I become exhausted in a matter of minutes. It’s not that I’m always actively thinking about not being able to afford things, it’s that the idea of it is always lurking in the back of my mind, inconveniently piggybacking on my tendency to feel overwhelmed in crowded spaces. I feel like life’s biggest amateur, a burden to an otherwise easy-to-navigate system. But I know it’s not true, and that the system is designed in such a way that I’m going to feel left behind even if I work hard. I know that the extra time we take comparing prices, holding off on expensive purchases, and checking our bank accounts is valid, necessary, and not our struggle alone.

The receipt told us that price-matching saved my mom and I 20 dollars. My mom exclaimed this to me as we loaded the groceries, the woman’s partner side-eyeing us. “That’s really good,” I exclaimed in return, and I didn’t even look at the couple before we left.