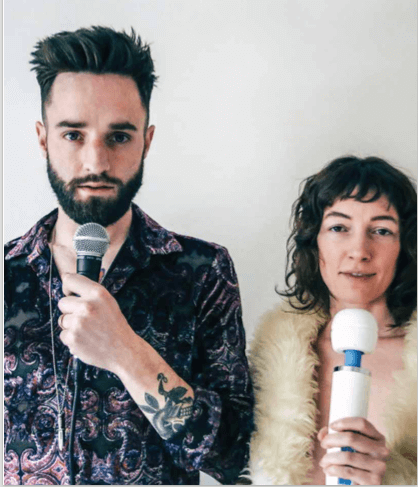 “We’re talking about something that, for the most part, everyone does or everyone has an experience with or everyone thinks about,” Saunders says. “None of us would be here if it wasn’t for this one thing yet, for whatever reason, it’s just drowning in taboo.” For MacLean, the show is “really about how we talk about sex as much as about the sex that we’re having.” To deepen those conversations, the hosts call on guests, such as Jenny Yuen, author of Polyamorous: Living and Loving More, Maryanne Fisher PhD, a psychology professor with expertise in female intrasexual competition, and Russell Louder, a trans, non- binary musician and performance artist.

“We’ve covered so much, but there’s still so much work to be done and so many people to find to talk to,” MacLean says. Loyal listeners have encouraged the pair to go beyond the studio, so earlier this year they took the unconventional and honest sex-ed podcast to live venues across Eastern Canada, which they felt took episodes to a new level. MacLean says:

“When we record at home we always have the option to edit things out, but on a live show, once it’s out someone’s mouth, it’s out there. The stakes are higher too, when it’s live, and my impulse to share and be honest is even stronger: The audience can see you and people are intuitive, so they can tell if you’re holding something back.”

Vulnerability, is an essential tenet of the podcast. For Saunders, who lives with cystic fibrosis—a chronic and fatal lung disease—it’s part of a greater pursuit to bring the conversations around disability, illness and sex out from behind closed doors. The effort complements his work on Sickboy, an acclaimed podcast about illness and disease, which he hosts with his two best friends.

“It was always a question that I found really fascinating: You live with this illness that affects you in several ways. How does it affect your relationships? How does it affect your sex life?” Saunders says. That desire for honest, shame-free dialogue comes through in Turn Me On, when he speaks with guests who have a physical disabilities, mental illness or bodies deemed out of the ordinary. Saunders says people get “weird and sort of uncomfortable going into that territory,” and that he hopes to shift perspectives by asking those important questions.

At TEDxToronto 2017—nine months after launching Turn Me On—Saunders presented the keynote address: “Embracing your expiry date.” He shared how his illness forced him to accept his own mortality and live without fear, particularly in his career and relationships. He and MacLean hope to inspire listeners to seek out that kind of intimacy and honesty with themselves and others.

And beyond sex, Turn Me On offers those tuning in an opportunity to feel less alone in their unique ways of being and desires, MacLean says. “I think that really motivates me to keep doing what we’re doing, because loneliness just keeps us trapped— we’re not evolving if we’re not relating.”