This Magazine is thrilled to announce our incoming editor Erica Lenti. Erica is This Magazine‘s current columns editor, and has worked with This since 2012. She is a Toronto-based editor and writer and previously served as deputy editor of Torontoist. Her first issue as editor debuts in January/February 2017. She sat down with outgoing editor Lauren McKeon to discuss her vision for the magazine, the highly important subject of caffeine, what she’s reading now, and what book she’ll never, ever read.

You can say hi to both Lauren and Erica next week in Toronto on Sept. 22 at our 50th Anniversary Party in Toronto, and also on Sunday Sept. 25 at Toronto’s Word on the Street Festival. We know you’re as excited as we are to see where Erica takes This Magazine in its next half-century! 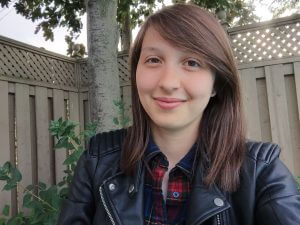 Tell us about how you discovered This Magazine, and what made you want to keep on reading. I first came across This back in 2011. I was finishing high school, applying to every journalism program in Ontario, and eager to be part of Canada’s journalism industry—and that meant buying and reading every magazine cover to cover that I could. It was also around the same time that I was coming to understand my role in the world: I was a young queer woman looking for journalism that spoke to my realities. This ticked all the boxes, and I grabbed the last copy off a shelf at my local Indigo.

After reading that first issue, I was hooked, and I subscribed immediately. I knew I could count on the magazine to offer progressive, smart takes on the world around me, and written from those with diverse perspectives (including those I could personally relate to). Five years later, This continues to do that and more for me.

Without revealing all your editorial secrets, tell us more about what you have planned for This Magazine. In keeping with what I initially loved about This, I want to continue facilitating the telling of underreported stories from perspectives too infrequently heard from in the Canadian media landscape—because that’s what we do best. Oh, and I’m excited to say you’ll definitely be seeing us online and interacting on social media more often.

What are you reading now? And what’s next on your to-read list? I am currently reading Men Explain Things to Me by Rebecca Solnit during my commutes to work, a collection of essays from 2014 that I picked up on a recent trip to New York. It touches on modern-day feminism, rape culture, and mansplaining, and its bold cover elicits many strange looks from men on the Toronto subway, much to my delight.

I also just finished a multi-chapter longread from the LA Times about a PTA mom who was framed by affluent lawyers in her tight-knit community, a story I really can’t do justice, so please just read it. It’s intoxicating.

The This Magazine office thrives on coffee. We live and breath coffee. What stay awake game strategy will you bring?
I am not a huge coffee person—I enjoy the occasional espresso—and find myself instead guzzling energy drinks to stay awake. I know, I know: they cause kidney stones and could lead to a heart attack and my early demise, but they taste so sugary and delicious. (I highly recommend the blue Red Bull.)

What question do you wish people would ask you, but they never have? Why I never have—and probably never will—read the Harry Potter series. (Please don’t send any hate mail to the office.)