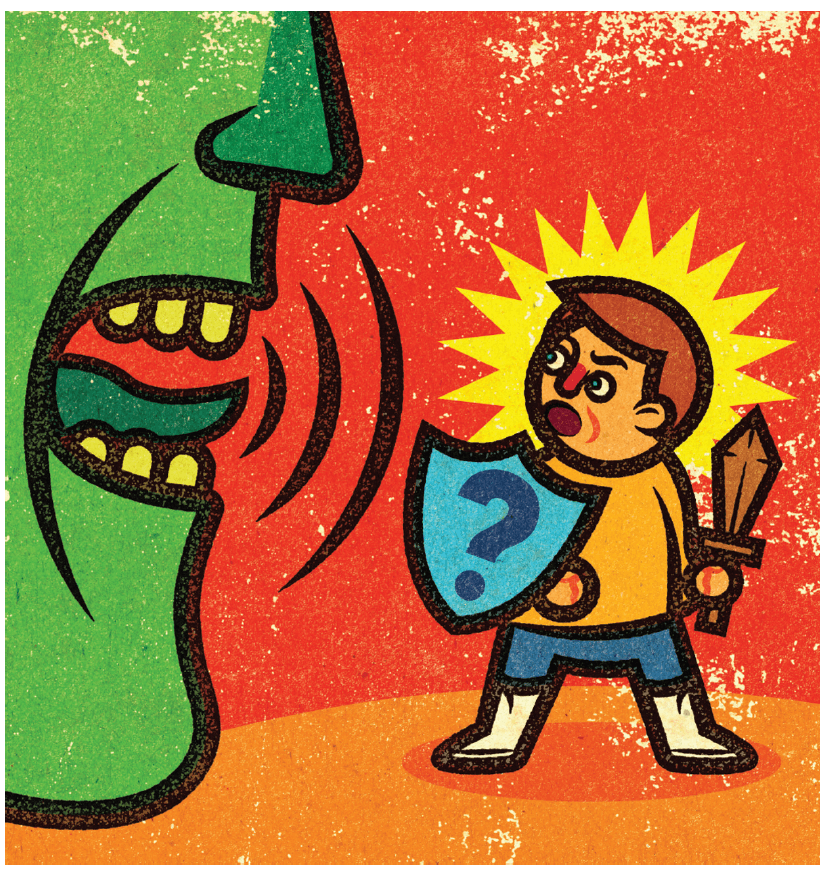 THIS APRIL, I attended Easter dinner at my girlfriend’s family home. There were nine of us gathered around the table—including K, my girlfriend’s charming seven-year-old daughter. As the night went on, we drained numerous bottles of wine. No line of conversation was immune from good-humoured interruptions and off-topic diversions. It was normal adult fun.

K, however, was a little overwhelmed when trying to listen to a story her grandfather was telling. She saw it as a lack of manners—exactly how it would have seemed to a young girl outnumbered by loud grown-ups. She hadn’t yet grasped the latitude adults grant each other when celebrating. As K saw it, we were obstructing her grandfather. Everything she had learned in life until then told her we were in the wrong.

She tried to silence us. I looked to my girlfriend to see if there would be a hush or an idle threat of bedtime (I had yet to earn a say in such matters). Sure enough, the moment came: she went over to K’s chair and pulled it out. Here we go, I thought. But instead of chiding her, she moved K over to her grandfather’s lap and he told his story directly to her. The rest of us continued on. Problem solved.

The moment stuck with me. It illustrated how quickly I assumed some kind of reprimand was necessary. My girlfriend, to her credit, chose to empathize with her daughter’s point of view and solve her problem. Though I know hers was the better decision, I still doubt that my internal reaction to the situation was particularly unusual, or that it had anything to do with K’s actions at all.

There’s a strong connection between the behaviour we expect from children and what we experience in the public at large. If we’re faced with adversity we think is illegitimate—at home, at work, or in line at a coffee shop—the easiest response is to enforce compliance without debate or explanation. No talking back. No questioning the boss. No butting in line. Growing up, I knew this as the “because I said so” rule. Employed by my parents, teachers, coaches, and eventually my peers, it meant the response was predetermined. I’ve always felt that shutting someone down like this was a desperate grasp for dominance. Such brutal effectiveness is hard to deny, though—and it is understandably addictive.

Dropping the proverbial hammer allows those in dominant positions to temporarily enjoy the illusion of willful obedience. But other crises will undoubtedly emerge, and regularly forcing weaker parties to comply can only lead to resentment and weakened capacities for compromise. We often hear campaigning politicians lauding disagreement as the lifeblood of democracy, although they entertain it as little as possible in practice. Our system is designed to suppress dissent with prorogations, omnibus bills, and majority governments.

It was just after my Easter dinner that Bill C-51, Canada’s controversial “anti-terror” legislation, flew through Parliament without much debate. Framed by the government as a necessary measure for keeping us safe, the few who spoke out against the bill were tarred as terrorist sympathizers. During committee debates this past March, Conservative MP Rick Norlock maligned the senior counsel for the British Columbia Civil Liberties Association. “Are you simply fundamentally opposed to taking terrorists off the street?” Norlock asked. MP LaVar Payne then mused that Greenpeace Canada shouldn’t worry about the bill unless the organization itself was a national security threat.

The Conservative party rhetoric coaxes us to be tough on our enemies, but their bill forces us to be tough on ourselves by broadly redefining security threats and diminishing Canadians’ access to vital information. With this new law, Parliament made an aggressive statement: we will have an obedient nation. And despite the promises from opposition party leaders to alter the legislation after this October’s federal election, reasonable dissent doesn’t resume its former health after it’s been crushed. It becomes something more bitter and intense. When I consider my emotional reaction to the bill’s passage, part of me wonders if I narrowly avoided fomenting the same feelings in K during our Easter dinner.

The recent surge of stories about police abuse against unarmed black civilians in the U.S. has too generated an international conversation about power, who has it, and how it’s misused. In The New Yorker’s August 2015 profile of Darren Wilson, the former police officer who killed Michael Brown and incited Ferguson’s unrest, Wilson describes his perspective on life as a refutation of historical context. “What happened to my great-grandfather is not happening to me. I can’t base my actions off what happened to him,” he said. Context is inconvenient for Wilson because it prevented him from doing his former job the way he wanted to do it—by assessing only the immediate moment. His myopic view of the power he represented, and ultimately misused, echoes in the Harper government’s ad hominem attacks on critics. Refusing to negotiate meaningfully with dissent only exacerbates divisions. No press release, community engagement plan, or election promise can rebuild public trust once breached.

Power today is less a goal than a verdict, a privilege shored up in defence of an ever-increasing roster of enemies. Our superhero movie franchises portray it as both a responsibility and threat, and these fantasies hint at a darker undercurrent in the mirror of popular culture.

What Tony Stark does with his Iron Man suit isn’t as worrying as the tempting dream that such a suit should exist to set the world right. Our enthusiasm for billionaire Bruce Wayne’s extralegal vendetta against Gotham’s criminals hinges on a common agreement on the black and white of right and wrong. Somewhere in Christian Bale’s gravelly timbre, there’s a hint of former Conservative MP Vic Toews’ binary thinking: “Either stand with us or with the child pornographers.” Oppressive actions like C-51 don’t begin and end in party ranks, nor do they originate in comic books. They’re rooted in our broader cultural attitudes towards obedience.

In Stanley Milgram’s 1961 psychology experiment, he famously duped participants into thinking they were administering an audio-based word-pairing test to fellow volunteers in another room. With each incorrect answer, the attending scientist commanded the person asking questions to shock their peer at increasing voltages. Milgram found that, when prodded by an authority figure, 65 percent of participants were willing to go to the maximum of 450 volts. (There were no actual shocks—only actors and prerecorded howls of pain.) As Milgram wrote in 1974, “the extreme willingness of adults to go to almost any lengths on the command of an authority constitutes the chief finding of the study and the fact most urgently demanding explanation.” He goes on to connect a person’s early experiences with authority to their adult perspectives on obedience. This is what concerns me most as someone new to parenting.

I don’t know if there is an ideal obedient state to seek out in children. Contributing to a person’s growth is complex but I’m learning to be a positive influence on K. In the conversation we had after Easter dinner this year, my girlfriend told me it’s important to consider the kind of person we want her daughter to become. If K is to be someone who is unafraid to stand up to power, that process has to begin now. Its genesis is in the small moments when we negotiate our control.

SEAN MINOGUE’s non-fiction writing has appeared in Full Stop, Vancouver Review, and The Georgia Straight. His plays include Prodigals (2011) and Us & Everything We Own (2013). After spending nearly a decade on the West Coast, he now lives in Toronto and is at work on his first novel.