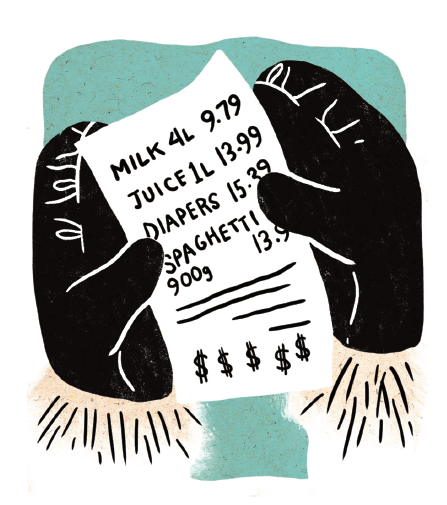 On the front lines of the North’s rising food crisis

A young, Arctic Bay protestor, about as tall as a baby tree, appears snug in pink mittens and a fur-trimmed coat. Their hands clasp onto a rectangular-shaped cardboard sign: “I need milk.” For Nunavut residents, two litres of milk can cost as much as $14.

Canada’s North is in crisis. The short phrase “food insecurity”—as blunt as the high-price stickers—comes with a complex history of the North’s experience with Westernization, poverty, and isolation. The term itself refers to inaccessibility of healthy and affordable food. In Nunavut, there is a 70 percent rate of household food insecurity, over eight times higher than Canada’s average household. Essentially, this means many Nunavummiut go hungry every day. And on June 9, 2012, they decided to stop suffering in silence.

That day, 30 members of Feeding my Family, a Facebook community of Northerners founded in that same month to bring awareness to the area’s high food costs, took their protests offline. Gathered in front of Iqaluit’sbig box grocery store,NorthMart, the group cheered, chanted, and waved protest signs. Within four days of the inaugural peaceful protest, Feeding my Family’s online member count jumped from around 4,000 to 19,000—over half of Nunavut’s population.Two years and five protests later, the Facebook page is updated daily with posts from Northern citizens and angered Canadians who want to help.

Feeding My Family creator,Leesee Papatsie, who launched the group as an answer to the territory’s outrageous food costs, says that she expected to only do one protest. However, after the first protest, community members expressed a desire to do more. If you were to look up the word “protest” in an Inuit dictionary, she says, there would be no definition. Though speaking against injustice is “not traditionally who [Inuit] are,” she adds, “You look at those prices and think, ‘Who in the world would put those prices?’”

Today, the group continues as a “wall” of shame: members post pictures of food, household items, diapers, hygiene products, showing their high costs. On May 29, 2012, Papatsie shared some of the group’s first photos showing the high cost of food in Nunavut: $16 for cranberry juice, $11.65 for four litres of milk and $13.69 for 2.2 kilograms of flour. Feeding My Family now has 21,000 members. Yet, prices have not improved. In September 2014, for instance, a member posted a photo of an Orville Redenbacher’s 10-bowl pop-up popcorn that cost $20.59. Ontarians have the luxury of visiting their local Walmart to buy the same product for $6.97.

Papatsie says she understands food costs in the North will be higher—they’re in an isolated area with scant resources for infrastructure—but she maintains retailers hold some responsibility when it comes to pricing: “They are ripping people off. Period.”

Chris Klar, who manages one of the two independently-owned retail stores in Arviat, Nunavut, located in the Kivalliq Region, says that isn’t the case. At Klar’s store, customers can buy a pound of lean ground beef for $4.99, an 18 carton of eggs for $4.99 and four litres of milk for $6.79. This is, he adds, thanks to competition—unlike other Northern retailers that might be the only store in the community, his store, Eskimo Point Lumber Supply, can abide by the laws of supply and demand.

Even so, Klar contends many people who complain about food prices in the North are actually misinformed. Some foods, he adds, such as flavoured water and most “junk food,” are not covered under the Nutrition North Canada (NNC) federal subsidy program. Introduced in April 2011, NCC replaced the former Food Mail program.NCC differs in two key areas: unlike Food Mail, it only subsidizes so-called “healthy” foods, and, also unlike Food Mail, it passes those savings directly to the retailers. Subsidies are based on the cost per kilogram of a particular food, multiplied by the kilograms of the product. Stores are supposed to pass savings onto the customers. Some indicate what a product would cost if there were no subsidy; others don’t.

Reasons or blame aside, some just want to help. The grassroots group Helping Our Northern Neighbours works with members of Feeding My Family to connect those seeking food donations with those eager to donate. As of September 2014, the group’s donor list (those waiting for donations) consisted of 106 families. It includes elders, single parents, couples with children, grandparents raising grandchildren, and extended families living together, according to B.C. resident and group director Jennifer Gwilliam. “We need to get our name and mission out there so that we can reach many more potential donors,” Gwilliam says, “I hate having to make people wait a long time for help.” People are often desperate, she adds, and many tell her they go without food for a day or more so they can feed their children. Some days an entire family may not eat.

The Government of Nunavut has also created an initiative to alleviate hunger and poverty. The Nunavut Food Security Coalition—which includes Feeding My Family and grocery chain North West Company—released the Nunavut Food Security Strategy and Action Plan in May 2014. The plan is designed to “provide Nunavummiut with an adequate supply of safe, culturally preferable, affordable, nutritious food” and to also promote traditional values and  and environmental sustainability. The Coalition has identified six focus points, including food production and legislation, alongside several objectives, such as enhancing school nutrition programming.

Sara Statham, the territorial food security coordinator for the Government of Nunavut, admits there are still a lot of “big picture items” that need to be addressed—such as the loss of traditional culture—but believes the plan is a start. Grocery stores, for example, she says, are relatively new in the North. Papatsie adds it’s a common misconception for southerners to think the Inuit can easily harvest food.Many are finding it harder to keep up with the demanding prices of harvesting country food, such as caribou, char and berries. Foundational changes must be made, says Statham. “But in the meantime,” she adds, “we can do what we can in terms of ensuring people have access to resources that can help them in the short term.”

In Feb. 2014, Samara, a Canadian research group, nominated Papatsie for their “Everyday Political Citizen Award.” Papatsie accepted the nomination with hesitation. “I didn’t create Feeding My Family for me. I created it for the people. The people who keep posting pictures and the people who keep the site alive,” she says. “I know kids go hungry daily. I know people struggle to put food on the table meal-by-meal, day-by-day. That’s who the site is created for.”