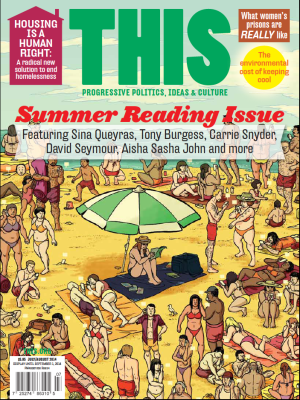 a word before. At all. When no one
listens he curls into a basketball.

His bee-loud glade’s a sling of mud,
he digs for clues, unlucky grubs.

He digs, and digs, and reads the soil
conditions for paraphrases of the stuff

that’s best remembered with a nose supple
as a fine-tipped pen. When? Always.

He’s rough-hewn, but excuse him, he’s sorry,
oh there!, that shrub’s a fine adornment

for a burrow’s roof. It’s his job. To find
some retro-fitted fern, suburban,

to dwell under, like a rooted ballast in case
it takes the notion to doff its cap, fly away.

He can’t see us coming and tries not to care.
Besides, we smell like coffee mugs a mile off.

He plays at night. Inhales our molecules,
jostles nature’s volume, and toys with carnivores,

lending his luxury to teach each of us in turn
that life’s impending sport. He’s got time, do we?

Please don’t try to touch him, nervous as he gets
when you approach, or talk. He’ll moralize.

David Seymour’s first book, Inter Alia, published by Brick Books in 2005, was nominated for the Gerald Lampert Memorial Award. His second book, For Display Purposes Only, was published in 2013 by Coach House Books. David currently lives in Toronto where he works in the film industry.