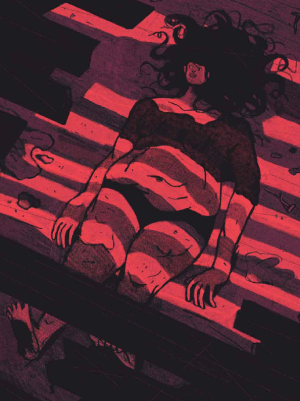 If I should stay,
I would only be in your way.
So I’ll go, but I know
I’ll think of you every step of the way.
—Whitney Houston

There is a family that lives horizontally under the front lip of a karaoke stage in the Philippines.

On the stage the great performer—sings “I will always love you” as she fills the sky with clouds of powder from her rising and falling wings. She occasionally squats and gives birth to animatronic children that rock from side to side as they edge away from her talcum skirts.

This figure has two voices: one, as mentioned, is the voice of the deceased pop star, Whitney Houston, and the other, originating from Linda Blair. This voice is explicitly horrific, a powerful kee ay meant to invoke a demon. The face is flirtatious.

The first patriarch of the family was abandoned here as a child. His wife was sitting in the fourth row, a teenager. He took her when she stood to run. It is rare that the audience leaves, but you can see the signs. Ragged seats plunged in and bloody. Molars plucked from their deep anchors.

It is the only way families can be formed under the stage. Kidnapping. Forced marriage. A ceremony performed in whispers by the thief, as Whitney Houston’s mad voice drips down through the powdered sky and is tamped on the sub-sky’s boards. No one here has seen the lip sync artist’s face. They can only see the audience. Fainting
and crying and hiding their faces.

We can believe that the artist is female and horribly pretty, madefrom the dainty frame of a male. The song has been dated by echo particle readers and is known to have begun four to five million years ago. The first family dates back only four or five hundred years ago. They have only ever interbred.

There are no more audience members standing or leaving. It is the current generation, the mother and father and their two children, Jello and Pete.

Jello sleeps on her back. Pete against his mother and the father rests at the far side near dark cases. Tonight, Jello lies awake listening to a low flying flock of birds, Linda Blair birds. They get their voices from her but the origins are vaudeville. Cold nighttime noises, short trumpet laughs that follow failed gags and violent pranks.

Jello hasn’t slept all week. Her brother has been taunting her. He has been calling her fat. She lays on her back so gravity draws her belly flat. If she turns on either side, her abdomen oblobs. Her brother is singing something in his sleep. Her mother is noisier. Her sinuses plugged by powder and her throat dried and leathered. Her father, the
blood line of the thief, is silent by the cases.

Jello presses on her sides, searching for the extra weight. It is impossible to tell your form when you have never stood, or sat. Jello pulls her legs up and her knees are blocked by a truss. She drops them and blows angrily at the dust falling on her face. There is no way to tell if you are normal like this. Her schooling is confined to memorizing the feet, identifying the song and curing the fetai that are turned against the kleigs. There are no stories for her to know and she feels this. There is no one for her to know, except the brother who thinks she’s fat, the father who will soon start filling her with sperm and the mother who will pull the unborn out to cure.

Jello is part of the new, unhappy generation. She feels deprived and insulted and bored.

There is a subtle change in the audience, a quick collective breath. The animatrons are dropping and it will be morning soon.

Jello turns on her side and cups her oblob. Today will be brutal. No sleep and no reason to stay awake.

Jello flips onto her stomach. It is an unusual position, one that feels transitional. She feels it in her thighs and shoulders. This is a position from which you move into another.

She lowers her forehead and draws herself up until her back is
stopped by a joist.

The father. The thief.

Jello pushes forward and half of her body lies beyond the down
stage.

The sound of Linda Blair Birds hits her like hot coils on the skin. The powder is real and thick in her hair. She feels hands grabbing her feet and she peels at the fingers with her hooked toes.

Jello pulls her knees up and lies exposed under the Whitney Houston sky. The song makes no sense this loud. It has a character that goes beyond climate, beyond weather and time.

Jello forces herself to sit. She turns, open her eyes.

The family below is pressed against the light, like faces on glass. It is time to look up.

The angle doesn’t let her see. The singer is back too far. Jello plants her palms at her sides and leaps up. She has never stood, so her legs lose all strength and she falls back into an empty seat.

It is the seat that has been empty for four or five hundred years.

The girl beside her turns and smiles. She opens a napkin offering Jello a piece of peanut brittle.

(This record contains indirect information which should not be mistaken for abstracted figures.)

Tony Burgess writes fiction and for film. He lives in Stayner with his wife, Rachel, and their children, Griffin and Camile.