Scientists are worried about the hushed return of the political muzzle (forgive my pun). The Star recently discovered the feds will soon be hiring a new Canadian lab leader in Winnipeg. The boss position at National Microbiology Laboratory, previously filled by Dr. Frank Plummer, was “quietly” vacated. And, the search for a new director has drawn plenty of criticism. Much of it centres on the way the government has chose to vaguely advertise the position: starting salary is $132,600, bilingualism is imperative, and candidates must have the ability represent an national and international organization. Doctorates, experienced scientists, published scientific papers are not explicitly requested—and critics told the Star that’s because the government isn’t necessarily looking for a scientist, but a bureaucrat.

Then there is the fishy timing. The Star reports that officials were aware of Plummer’s reign ending in the spring, but the job posting went up on April 23, three weeks after Plummer had left. The posting closes on May 14, giving applicants a meager three weeks where they usually see four.

That icky feeling is a familiar one, or it should be to Canadians. In July 2009, This Magazine‘s Craig Saunders reported on researchers being banned from talking to reporters by their “Environment Canada gatekeepers.” Saunders explained how this “causes delays” and “is causing a chill” in journalist communities. 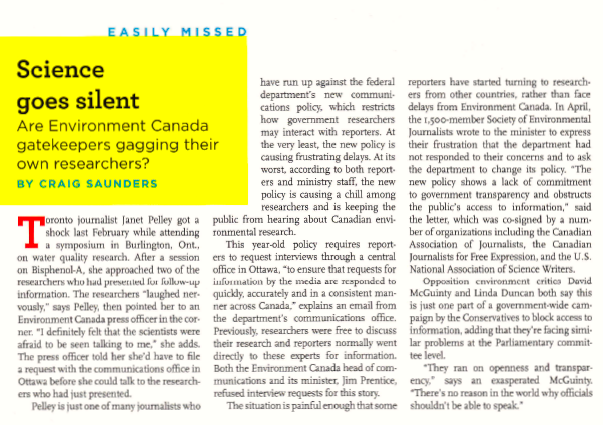