In recent weeks, much of the the world has been closely watching the developments in Crimea. With people debating Russia’s occupation and the outrage it has caused in some sectors, it seems common nowadays that such aggressive action from any country can, and will, be met with near unanimous protest and condemnation. This sort of reaction has been seen before: when Iraq invaded Kuwait in 1990, which resulted in a worldwide coalition that repelled the invading force; and again in 1980, when the Soviet Union invaded Afghanistan, to international protest that resulted in forces eventually leaving in 1985.

And yet, the Chinese occupation of Tibet seems to have been met with little resistance from the worldwide community, despite a reported 127 self-immolations and a duration of more than than 50 years.

March 10 marked the 55th anniversary of the Tibetan uprising against the Chinese occupation, and in 55 years very little has changed. With the severe repression of human rights, mass relocation of peaceful nomadic tribes, and an estimated 1.2 million deaths as a direct consequence of Chinese occupation, one might expect countries, like Canada, to voice strong protests, to threaten sanctions, and even to put severe pressure on China, as they did to other countries in similar situations.

Well, back in 2008, Stephen Harper did send a strongly worded statement to the Chinese government in regards to the then brutal crackdown on uprisings in Tibet. “Canada shares the concerns about what is happening in Tibet,” Harper said. “Canada calls upon China to fully respect human rights and peaceful protest. Canada also calls on China to show restraint in dealing with this situation.”

This seemed more than a little hollow however, as a few years later, in 2012, Harper agreed to a Chinese takeover of Nexen, despite the ongoing atrocities in Tibet, and protests against said takeover. Arguably, the Harper government is more interested in trade opportunities rather than human rights, despite previous statements to the contrary. According to Students for a Free Tibet at the time, this take-over “would give the Chinese government direct control over critical energy resources.” They added: “It will also make Canada complicit in China’s human rights atrocities in Tibet as the China National Offshore Oil Company (CNOOC) is heavily funding the forced resettlement of Tibetan nomads.”

But hey, on the plus side, at least we got those cuddly panda cubs.

To be fair, the Canadian government has been very supportive of the Dalai Lama since his exile, and made him an honorary Canadian citizen back in 2006. The Dalai Lama has also made several trips to Canada and met with Harper despite warnings from China, who branded him a “political exile who has long been engaged in activities aimed at splitting China under the camouflage of religion.” But this hasn’t been much help to those in Tibet, and the protests and calls for Canada to do better continue. 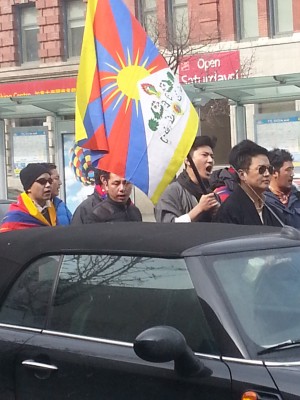 In Toronto, more than 1,000 people marched to mark the 55th anniversary, and the sixth year since widespread protests have swept through the Tibetan region. It ended outside of the Chines consulate. “Despite 55 years of China’s brutal occupation and systematic attempts to wipe out Tibetan resistance, the Tibetan people’s hope for freedom is stronger than ever before,” Urgyen Badheytsang, national director of Students for a Free Tibet, said in a release. “March 10 is symbolic of the enduring spirit of the Tibetan people’s struggle for freedom.”

He and others are calling on the worldwide community to hold China accountable for its actions. As Badheytsang told Inside Toronto: “I want China’s government to stop torturing Tibetan citizens, give back their human rights, freedom of expression, freedom of religion, their freedom.”