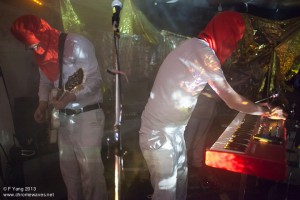 Where do you go after you’ve successfully presented upwards of a thousand bands at hundreds of shows and festivals in Toronto, including notable early sets by some of this century’s most beloved independent Canadian musicians? If you’re Jonathan Bunce and his fellow Wavelength programmers, you get out of town—literally.

This weekend, the Wavelength Roadshow hits the road for the first of four showcases outside Toronto, where the series was born and helped foster the careers of such artists as the Constantines, Broken Social Scene, Caribou, and Fucked Up.

But this time, the focus will be on a trio of bands Wavelength has developed a long-term relationship with for the inaugural year of its Artist Incubator program: Fresh Snow, Del Bel, and Most People.

So how is this different from what people might expect from an independent music presentation?

“I think the incubator was to be some sort of hybrid [between] being a presenter and being a manager, but really just expanding on the role of Wavelength as a champion,” says Bunce, aka Jonny Dovercourt. “It’s collaborating with bands we really like that we recognize have a collaborative spirit.”

In the case of Fresh Snow, Bunce talks about the band’s commitment to creative presentation. The show they approached Wavelength to help present takes place in a cube made of white sheets, with visuals projected out toward the audience and the musicians in silhouette. For different reasons, Del Bel and Most People also brought to the table something other than a standard rock ‘n’ roll show.

“When you’re 20 it’s really exciting to go see live bands,” Bunce explains. “Not that it isn’t when you get a little older, but you kind of want more of a multi-sensorial experience.”

The incubator idea had been percolating in Bunce’s mind for awhile, and was inspired by the way talent is developed in other artistic disciplines such as theatre or fashion.

“Wavelength has always tried to import these organizational models from other arts disciplines … because we kind of get sick of the music industry bullshit. When music industry people talk about artist development, it doesn’t really ever mean anything.”

The tour technically began in Toronto during North by Northeast, when an obscure gallery downtown hosted the show in true Wavelength style.