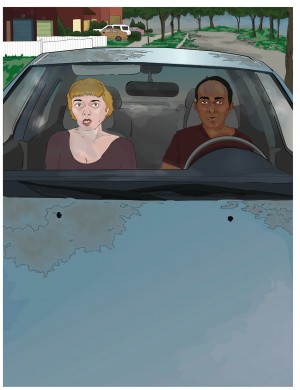 The rules would save them, of that he was certain. Sixty percent certain, anyway. Parthi dipped a wooden spoon in the pot simmering on the stove. Nadia had asked for Indian, and though it wasn’t his favourite food—the smells reminded him of glittery childhood festivals—he wanted to please her. As he stood stirring the masoor daal, passing the time until she arrived, he wondered if there might be a way to calculate the odds of the rules protecting them. He smiled to himself at the ridiculousness of the thought. As Nadia liked to remind him, there were areas of life where math didn’t apply. She once sent him a snippet of something she found online: “The commutative property of math, A+B=B+A, does not apply to life. Lost and found is not the same as found and lost.”

Yes, well, he’d lost his wife to Facebook. But he’d found Nadia on Twitter, a mere five months after Tara left him for her long-lost, middle-school crush. Parthi wasn’t certain what he felt for Nadia, but it was relief to feel something. After Tara moved out, two months into his sabbatical, he’d drawn the curtains and taken to the marital bed, contemplating non-mathematical concepts he’d neglected for years: concepts like duty, commitment, betrayal. And love. He knew the odds of finding love again were low, and yet one night in late March, out of the blue glow of the laptop propped beside him on the bed, Nadia had appeared: @suburbanSpy is now following you on Twitter. Today, four weeks and three days after he received that message, she was following him all the way to his home in Kingston. And though he knew this didn’t mean she was his—there was her husband to think of, but Parthi preferred not to think of him—he didn’t want to lose her. Not now, not tonight. For four hours, from the time she arrived on the train from Toronto, till the moment he dropped her off at her friend Joyce’s, he was free to believe in the proposition that love could outbalance loss.

His cellphone beeped. As he walked into the family room to pick it up, he willed himself not to be aroused. It was a conditioned response: Nadia was the only one who texted him these days, and some of her texts—maybe one in seven—were erotically tinged. So when he heard the beep, he’d feel himself becoming hard, and have to think about something unpleasant. Like grading his Intro to Mathematical Logic exams. How pathetic to have to worry about such a thing at forty-nine.

Nadia loved to poke fun at his disdain for emoticons, which she considered symptomatic of his general snobbery. Early on, she’d sent him a list of all the spheres in which he was a snob: wine, food, literature, programming languages, movies, grammar, visual art, and music, especially music, though to some extent Nadia shared that snobbery. It was music that had brought them together, after all.

Parthi opened the fridge and took out an English cucumber. Nadia had requested raita too. As he began to grate the cucumber, noting the random pattern which the slimy strips formed on the cutting board, he considered the unlikely sequence of communications that had   resulted in the coming-together of two such different people: Sandra Brown, his some time student, tweeting that it was “cool when your favourite professor follows you back on Twitter”; Nadia, who followed Sandra, happening to see the tweet in her stream and deciding out of curiosity to click on Parthi’s profile; Nadia’s subsequent decision to follow Parthi and to reply to some of his trivial tweets about food and books.  And his decision to follow her back, a crucial move as it enabled private messaging between the two of them. Before Tara left him, Parthi had used Twitter mostly to connect with other mathematicians and students. Nadia was neither. Her avatar was a cartoon image of a fifties housewife, and her profile page linked to a blog about elementary education. But loss had clearly affected his frontal lobe. He clicked the follow button more readily than before.

On her end, he later found out, Nadia had been exploring his decades-old weblog and following the circuitous links to his memoir. She’d zeroed in on the parts about music, especially his reviews of concerts he’d been to in the early 80s, many of which she’d attended as well. Parthi had committed to memory the first direct message she sent him:

@suburbanSpy: Just spent longer than I’d care to admit reading bits & pieces on your site–so addictive. Was at Heatwave concert, too. Had forgotten lineup

She’d used up all 140 characters, no room for a period. He’d clumsily responded:

@pureMathprof: Funny, I’d pegged you as much younger.

Just what every woman wants to hear, that she’s old! It turned out she was forty-five, with two young boys and a husband. But she told Parthi later,“You had me at Heatwave.”

In the flurry of private messaging that followed, Nadia told him all about the summer of Heatwave, when she was sixteen. She’d gone on an exchange to France and lost her virginity with a purposefulness that Parthi found surprising. “I wanted to lose it with a Frenchman,” she wrote, “but I settled for a Québécois I met on my second night there.” (For the first time in his life Parthi had been tempted to type back “LOL!”) She recounted how she’d returned from Paris in time for Heatwave, an outdoor concert held outside the city, headlined by Elvis Costello and Talking Heads. Nadia had just discovered Punk and New Wave—late to the party, of course—and she said hearing those bands live had transformed her life. By sheer dumb luck, almost thirty years later she stumbled on Parthi’s online recollections of the concert. “It was like a hand reached through my computer screen, pushed through my skin and grabbed hold of the small, molten core of me,” she wrote. “The part that’s still alive.”

Parthi put the grater down and felt in his pocket for the iPod shuffle he’d bought earlier in the day. He’d filled it with the songs he’d been sending Nadia every morning since that first direct message. “Catching you up” was how he explained it to her. He understood her Achilles’ heel. It was his, too: music, which was a proxy for . . . what? Youth, passion, love?

The cellphone beeped again. Parthi glanced at the text: Hi sweetbf. Train’s arriving in your city (!) in 20 minutes. Can’t wait to…abide by the rules! He smiled and turned off the stove. In the entrance way, on the small Ikea table, he found the car keys. The rules were a joke they shared, a reference to regulations governing what could be shown between a man and a woman in Bollywood movies: chaste kisses were okay, but no French kissing; hugs and caresses were permitted if and only if clothes remained on. But Indian movie rules were constantly being contested and negotiated, and so were his and Nadia’s.

It was after their first “real life” meeting two weeks ago that Nadia had decided rules were required. They’d met in a Korean restaurant in a Toronto neighbourhood a safe distance from her home in Lytton Park. Brashly and without having planned it, Parthi had leaned in to kiss her lips, which were soft and tasted of the fruity Gewürztraminer they’d been drinking. Afterwards, on a  park bench, she’d let him kiss her again but when it was over, he noticed tears in her eyes. “Are you crying for M?” he asked, using her husband’s initial because she’d never revealed his full name.

Us. As Parthi eased himself into his old Honda Civic—Tara had taken the Volvo—and pulled the seat belt strap across his shoulder, he realized that he did not understand the nature of this “us.” And he still didn’t know what rules governed it. He picked up his cellphone and tapped the Twitter icon. The DM exchange from last night lit up the small screen:

Parthi pulled into the driveway and turned off the motor, but left the key engaged so he could listen to the end of the song that was playing. A cheating heart is still a beating heart . . .

“Jesus, turn that off!” Nadia said.

“The shuffle gods,” Parthi mumbled. He withdrew the key from the ignition and stole a glance at the woman in the seat beside him. Nadia looked tired, her green-gray eyes were blood-shot. Her dirty-blond hair, slightly mussed from the train ride, glinted coppery in the early evening sunlight.

“So this is where you live,” she said, gesturing towards the bland brick facade in front of them and the weed-infested lawn to the side.

“Yep.” For the first time since Tara left, he felt embarrassed by the degree to which he’d let the property go. He felt Nadia’s eyes on the side of his face and he turned to meet her gaze. She had once mentioned that M was conventionally attractive and knew how to dress. (“He has a guy at Harry Rosen,” she’d told him.) Parthi had a receding hairline and zero fashion sense. What did Nadia see in him? He could understand how a woman might be charmed by his online persona. Despite his mathiness, he was good with words. In pixels he shone. But in person, for an entire evening?

Nadia placed her hand on his leg, just above his knee. Parthi stared at her fingers, struck by their delicate paleness. He put his own hand on hers, and had a momentary vision of what the hand of a child of theirs might look like. “Quite the contrast,” he murmured.

“Yes,” Nadia said. Smiling now, she pulled her hand away from his thigh, grabbed a small bag from the back seat, and opened the car door. As Parthi followed her to the front entrance, he felt the flutter of an extra heartbeat in his chest. It was a benign arrhythmia that afflicted him when he was nervous. As if reading his mind, she said, “I’m nervous, are you?”

“Hmm” he said, “a little. There’s a decent bottle of Torrontés waiting for us inside.” As he put the key in the lock, she leaned into his body, and when he turned to look at her she kissed him, first on the corner of the mouth and then straight on. He felt her tongue slide against his. He pulled away slightly. “The rules . . .” he began.

Katie Lynes is a cat person living a dog person’s life in North Toronto. (Her soul, however, is thoroughly French.) She has published non-fiction essays in newspapers and (defunct) magazines, and has recently turned her hand to fiction. “Shuffle Gods” is part of a longer work in progress.