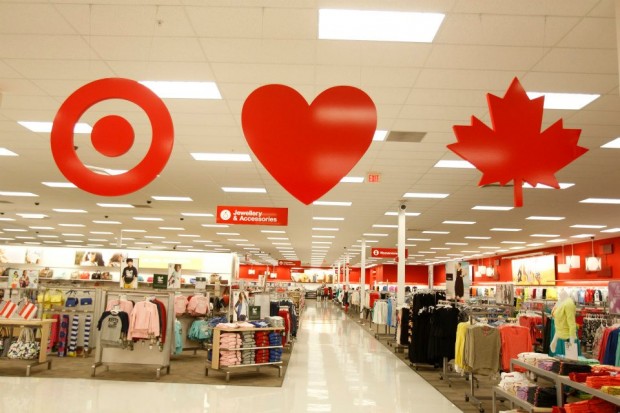 Forget St Patrick’s Day and Easter, March 2013 is Target month. The American big box store opened its first three Canadian stores yesterday, with one each in Guelph, Milton, and Fergus, Ont. These are the first of 24 set to open this month. By the end of this year, up to 135 Targets will cover the great white north. For the sake of comparison, there’s an average of 35 Targets per state in the US.

Is that the direction we’re heading in? Canada is already home to over 300 Walmarts, according to their website. When Walmart invaded in 1994 (was it only that long ago?) they bought out all of the 122 Woolco stores. History repeated itself in 2011, when Target bought 220 Zellers stores to renovate and move into. They even sold 39 locations to Walmart.

Sixty shoppers waited in line at the Target store opening in Milton yesterday. Two hundred people lined up starting at 6 a.m. for the 8 a.m. opening of the Guelph store. We get the hype: in place of Walmart’s in-store McDonald’s, all Target locations will have a Starbucks and an Apple shop. But I expected more from you, Canada.

How come our shoppers are so pumped about a store that supports unethical sourcing and sells cheap plastic merch, anyway? Or maybe it’s simpler to consider: What good can Target possibly bring? Target stores will supply 27,000 jobs upon completion, but try telling that to the former Zellers workers who lost theirs.

When most Zellers buildings were sold, employees assumed that they could stay. It’s only fair, they thought. It’s on the same turf and it’s practically the same store. However, Target wants to give all potential hires an “equal” chance — meaning these unionized Zellers workers would start from scratch. If they once held senior positions or received benefits, these would be lost. Target will have about double the workers per store than Zellers did.

American Target workers have come forward about their low wages and the company’s anti-union attitude. Recent US headlines like, “Workers Locked Inside Target Stores Overnight” and “Workers Cleaning Target Store Threaten to Strike” don’t bode well for the corporation’s reputation, either. This is the high cost of low price all over again.

At least customers can “expect more, pay less” as the slogan goes, or can they? Naysayers deny that Target can offer the same low prices as in the US. You’ve probably noticed, but stuff costs more here. Not to mention we have higher taxes and transportation and labour costs.

“A Target store with Canadian prices is no big deal, a Target store with American prices is what we want,” said a commenter on a Canadian Press article. And I can’t help but agree with that logic. Target has powerful branding and high-demand products behind them, but its discount prices won’t outdo those of Walmart anyway.

And that’s what we’re stuck with — two evil big-box bully stores instead of one. The red and white Target is shiny and new, but beyond the gloss is just another Walmart. “Buy Canada,” read a Canadian Tire sign near a Target on Monday. Either we tell Target with our loonies that they’re good fer nothin’, or watch other smaller businesses crumble.