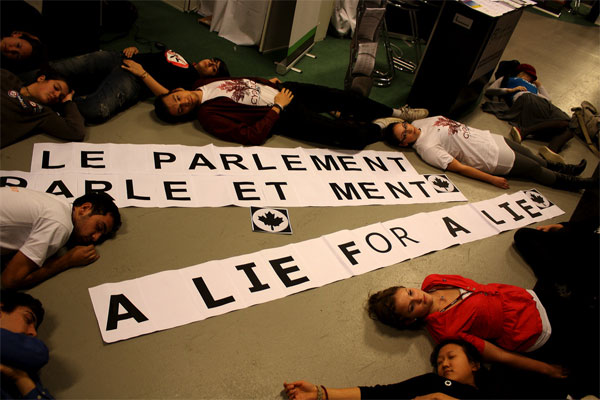 Things are not going well in Copenhagen. I find nothing positive to report from any of my contacts at the conference. It seems that delegates are fighting on the behalf of unnamed interests—those who want to maintain their greed and the status quo.

There is a great rift between the wishes of the people of the world outside of the conference walls, and the delegates – namely those from large countries – on the inside. Many protestors standing on the outside in Denmark are being bloodied and arrested. The massive global voice for a 350 parts-per-million cap on emissions appears to be going unheard. We could all use a little Woody Guthrie at times like these, and the song Christmastime in Washington seems to apply all too well.

Back home, activists are holding sit-ins in the offices of Finance Minister Jim Flaherty and Prime Minister Stephen Harper. This is all for good reason, with the Federal government now admitting they could give special exemptions to the tar sand industries, and CBC’s revelation of a leaked draft cabinet memo that give our negotiators significantly diminished targets.

Canadian youth held a “lie-in” , reacting to the Conservatives’ apparent change of position on greenhouse gas targets (pathetic to begin with) that now amount to nearly nothing.

As a movement outside the conference strengthens, those inside need to be reminded why they are there. That message has come from youth climate ambassador Mohamed Axam Maumoon, a 15 year-old from the Maldives.

Whether the overwhelming greed or resistance to change is human nature, or a reflection of the convention process, things don’t change much. Severn Suzuki’s mature call at the 1992 Earth Summit is exactly the same message that today’s delegates need to hear. The video is inspiring still today and worth a watch if you’ve seen it before, or still could use a contextual reminding.

All of this struggling to make change occurs as we know we can create a new economy with green job growth as the alternative to climate calamity. A growing movement must now remind delegates what they’re there for. At the same time, we now know we can’t leave it up to Copenhagen.

It was with some naïvité and hope, fueled by necessity for the human population of the planet, that this column began with the belief that much could be achieved at this conference. But we know that what followed up from agreements at the Earth Summit was minimal. The complexity of the negotiation works against itself, and we find countries that we thought were leaders to be taking lesser roles.

The Conservative government’s stance this week was the last straw for youth delegates. Barring any last minute changes due to world leaders’ negotiations—the same people leaving the negotiators with weak bargaining positions—this process will not be what saves millions of lives.

The only thing that will do that is a unified and massive mobilization of the largest social movement in human history. One that focuses on a positive global vision of what low-carbon can look like, and that concomitantly targets the high-carbon holdouts with effective strategies to make them converts as well.