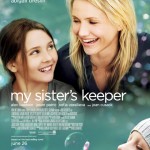 Every so often the media takes advantage of humanity’s fickle attention span, grabs hold and decides who or what we should all be paying attention to, whether that be Glenn Beck,  Spiedi, or Jon and  Kate Plus Hate…oops, I mean Eight. They’re those things everyone seems to be talking about, but you’re only vaguely familiar with.

Well, this week that title goes to Jodi Picoult.  She’s being introduced to the masses on various world media outlets, including The New York Times and BBC Radio promoting her newest book, Handle with Care.  Still, most people will know her work through the film adaptation for her 2004 novel, My Sister’s Keeper, opening friday (June 26) starring Cameron Diaz and Abigail Breslin.

Picoult has been a mass-market paperback author for 16 years and all her books tread on some extremely heavy topics and themes. Whether it’s a suicide pact, a school shooting, domestic violence or a custody battle, every single book features scarred children and puts a family at the centre of a morally ambiguous issue, forcing them to wrestle with just how far they are willing to go for the people they love.

My Sister’s Keeper centres around a young girl named Anna who is born via in vitro fertilization to be a genetic match for her sister Kate, who has acute promyelocytic leukemia. Anna is Kate’s ‘Saviour Sibling’.

From the time she was born, Anna  has been treated as an organ farm for her sick sibling. When her life begins, her cord blood is donated to Kate and when the disease reappears after a while, she donates her bone marrow.  Following that, when Kate’s kidney’s fail, their parents fully expect Anna to pony up one of her own. Finally, Anna  puts her foot down and files for emancipation, so she can gain control over her own body and decide for herself what she does with her own organs.

But what kind of parents would simply use one  child as a biological toolkit for the other, both simply electing to draw a line in the sand right from conception, essentially declaring that they care much more about the survival and quality of life of their child with Leukeima, than they do about the quality of life of the donor child?  They are creating a disability in the donor child, especially when that child starts donating organs, in order to cure a disability in the recipient.  How would you like to grow up knowing that your parents didn’t want you, they wanted what you could provide the kid that really counts? Knowing you were bred to be a means to an end  has got to mean thousands of dollars worth of therapy over a lifetime, not to mention,  the immense burden you’d live with knowing that your sibling’s potential future begins and ends with you.  In their zeal to make things better for their sick child, these parents have forgotten that their donor child is a person with feelings, not a corn field to be picked at.

While I don’t understand their extreme logic of preservation–one child over the other at all costs, to a lesser extent,  I do identify with having a parent that will go to sometimes illogical lengths to protect her disabled child,  and the desperation and fear that comes from a family member who yearns to keep her disabled child safe and protected, often  stiffling her child’s indvidual development in the process.  Though I never had a sibling that carried the keys to my survival in his body, I did have one who was burdened with much of the practical household responsibility my mother assumed I’d never be able to fulfill (at least, not at able-bodied speed). My brother became an on-call cabana boy for much of the household heavy-lifting that he probably wouldn’t have had to do,  if I didn’t have a disability.  My brother was also often forced to the background, as many siblings of disabled people are.  My parents were consumed with my disability, with all the afterschool activities and physical rehabilitation that that entailed, just as Anna’s parents are consumed by Kate’s treatment in the book.

All of Piccoult’s books are heavily researched to ensure the experiences of the characters are accurate and each book takes a real issue and pushes it to a philosophical extreme. In My Sister’s Keeper, the sliver of truth lies in bioethics.  Saviour siblings are real.  In the UK, the Human Fertilization and Embryology Authority [HFEA] has granted permission for parents of children with types of anemia and other genetic diseases to use Preimplantation Genetic Diagnosis and Human Leukocyte Antigen typing [HLA-typing] to create a savior sibling. At first, they ruled that PGD and HLA-typing may only be used to create a saviour sibling if, in addition to benefiting the recipient sibling, it also benefits the future of the donor by genetically screening the embryo for their sibling’s disease. They said that PGD and HLA-typing cannot be used soley for tissue typing where there is no benefit to the donor embryo. However, they reversed this 2001 ruling in 2004, finding that there was no evidence to suggest that the biopsy procedure disadvantages the donor baby any more than other in vitro fertilization babies, so now the creation of a saviour sibling is allowed without the 2001 restriction.

Now, you might be thinking, “How horrible for the donor sibling?” but don’t worry. In all eight cases where a donor sibling has been created, they’ve only ever donated their cord blood and bone marrow at a time when they have yet to begin their conscious life, when such a procedure causes no memorable trauma whatsoever. The HFEA has also ruled that you cannot use a savior sibling to donate organs later in life, as Anna is expected to do in the book, because of the negative cost-to-benefit ratio for the donor and the unethical opportunities such a thing would allow.  Besides, once the cord blood and bone marrow are transplanted successfully, the chances of the disease ever coming back to the recipient are extremely remote. Every successful transplant case has reported a total cure with no rejection or side effects thanks to the closeness of the genetic match.

However, even the real life circumstances behind saviour siblings bring up issues that the parents of children living with these diseases have to consider. In many of the eight cases where a saviour sibling was created or attempted, multiple children were brought into the world before a real genetic match came along. One mother had a  miscarriage and tried in vitro fertilization six times before calling it quits. Every parent has to seriously decide the point at which they will halt their efforts to save their disabled child regardless of the potential outcome.  There comes a point when people have to realize there is nothing they can do. Despite how gut-wrenching it may be, they have to stop, not only for the sake of their other children, but for the sake of their disabled child as well. They have to realize their comes a point when vigilance becomes obsession and good intentions get warped and bastardized to the point that they do more harm than good.  While I’m in favor of responsible use of genetic technology to save lives, I don’t want to live in a world of genetic tourists. All of these children, regardless of if they turn out to be the saviour, need loving parents who won’t judge them based on their lot in the genetic lottery. If these parents who are trying for a savior sibling came to me for advice, I’d tell them to ask themselves one question:

Would you want the same number of children you’re about to have, regardless of whether or not your older child was ever born with their current condition?

Aaron Broverman is a freelance journalist living in Toronto. He regularly writes about disability issues for Abilities Magazine in Canada and New Mobility Magazine in the U.S.