Grand Master Mark Shuey leads an army you don't want to mess with.

Last week, I saw this disturbing surveillance footage. It really does speak for itself and is just one example of a recent  rise in violence and robbery preying on seniors and people with disabilities. No one is off limits. (They probably never were.) Vulnerability equals victory for criminals (and sometimes cops) who figure disabled and frail means weak and easy. No more.  A new martial art is sweeping seniors centres across the U.S. Grandpa and grandma are learning how to kick ass with Cane-Fu.

Popularized in America by Mark Shuey and his Cane Masters self-defense system , Cane-Fu comes from the Korean martial art of Hapkido, which has incorporated canes in its weapons training since its inception following WWII. Shuey is a 7th degree black belt in Hapkido, trained mainly by one of Chuck Norris’ own black belt level students.  Shuey’s  Cane Masters self-defense regimen includes a full marketing onslaught of books, dvds, seminars, certified teaching dojos all over the world, and hand-carved, hardwood combat canes direct from Shuey’s own workshops on Lake Tahoe and in Flordia. Though his technique is most widely known, he’s not the only one teaching his own brand of Hapkido as a self-defence technique.

Ted Truscott has over 30 years of karate experience and at his Yama Neko Dojo in Langford, B.C. he teaches the Cane-Fu techniques and aerobic exercises he popularized in his two Raising Canes dvds. His tactics are a little more defensive than Shuey’s, but both masters definitely have something to offer–and not just to seniors.

“If you can dance and play golf or tennis, you can use a cane for self-defense,” says Truscott, but, as a cane owner myself, I don’t even think you need that much mobility to use a cane to defend yourself.  I holster my cane near the armrest of my scooter, so if I ever need to be a street fight hero, more than likely I’ll be doing it from a sitting position. All you would need is average uper body strength and Cane-Fu could easily be adapted to people with disabilities. I can’t help but think that if the man in the surveillance footage had a cane on the back of his chair, he may have been able to turn the tide. 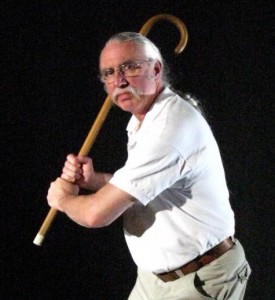 There is one thing I’m missing though.  Truscott says that aluminum drugstore canes with short wooden handles, like mine, are effective for combat. However, mastering Cane-Fu is best done with a combat cane that includes a modified wider crook, perfect for wrapping around the neck of a home invader and forcefully directing him back towards the door.  The crooked canes are more versatile, so the combatant has more moves in their arsenal, for gripping, throwing and generally controling their opponent. Wider crooks are also safer to twirl, since your hand could get caught in the traditional narrow crook. There is some division though about just how durable the hardwood combat canes are when put through their paces, but if you’re really suspicious you can order a heavier, clear lucite combat cane that will solve the durability problem.

Wherever I travel through the streets, I find myself constantly casing my surroundings like a gimp Jason Bourne. (How many exits? Where’s the fire alarm? What’s the ratio of men to women in  room? What makes a good improvised weapon in a pinch? Who already has a boyfriend? Can I take them? etc.) As a scooter driver, I have a distinct advantage over my adversary, as well as the walking senior citizen that’s normally targeted for Cane-Fu classes. (Electric chairs have the same advantage too.)  First of all, I move faster than walking speed (approx 6-7 km/hr.) and simple physics tells us that a cane traveling faster packs a much bigger whallup.  (I’d like to see you limbo under that.) Second, the scooter runs on electricity, so it travels in absolute silence. I can literally be right against your ass before you’ll even notice I’m there, perfect for a sneak attack.

Some combatants are taking the “sneak” part of the attack further by adding a little something extra to their cane. Cane Masters sells canes that have a few additional modifications, like a sharp, pointy, bird or viper head at the end of the crook, great for adding that extra painful sting to a strike.  Shark’s teeth bites are also carved in along the shaft of the cane  to add a grating burn as you rake it across the body of an adversary. There’s debate among Shuey and Truscott, as to whether these modified canes are advisable for purchase. Truscott argues that a cane like that may get you unwanted attention at an airport and may make it more difficult to prove you were acting in self-defense on your court date. However, the cane is completely legal and Shuey’s site promotes it as the only legal weapon you can carry into the passanger part of an airplane. The Homeland Security Act in the U.S. allows any kind of assistive device as long as it doesn’t hide a traditional weapon, like a sword cane. (Remember, these are the guys who consider it a fundamental right to bear arms.)  Personally, I would maximize the opportunity for as many modifications in the wood as possible, as long as they weren’t external or mechanized. As long as it’s part of the carve, I’d be happy to see what I could get away with.

Once you’re fully outfitted with the cane of your choice, buy a training dvd or join a dojo in your area.

I figured I’d give you a bit of a basic starter kit with some of the foundational moves of Cane-Fu below:

The Figure–Eight- Great for keeping people at a distance and a perfect aerobic warm up. Twirl the cane by the crook across your body in a figure-eight motion. For an extra challenge, try alternating hands as you twirl. Make sure your cane has a wide crook, so you can keep your hands intact.

The Cross-Body Block- Hold the cane horizontally with both hands across your body and thrust it outward, or on an angle near the top of the head, to block. If you are able, stepping into the rapid move as you thrust can push your attacker off balance. You may also want to thrust across the throat, or push an attacker against a wall this way.

Mid-range Crook  Strike- Swing the crook end of the cane from the side to strike the ribs and then pull the cane back  towards you really hard,  so the sharp horn digs into your attacker’s back.

Groin Strike- Hold the cane vertically with both hands, like a reverse letter “J”, with the sharp horn end of the crook facing toward your attacker. Then step in close to your attacker, as you pull up toward the sky with the crook between his legs. A modified sharp horn adds extra pain to this move. You may also hold the cane in position as you pull upwards, so that you may strike his face with the butt-end of the shaft at the same time.

Rake- This is a vertically diagonal strike going down across your body on both sides, like you’re drawing an “X” in the air with the cane. With speed and aggressiveness you can rake it across the body or face of your opponent. With the added shark teeth modification in the wood, you can grate your attacker’s face like cheddar cheese.

The best part about Cane-Fu is the way it takes advantage of the societal assumption of weakness among seniors and people with disabilities. Those who know Cane-Fu will always have a surprise in store for the rest of you, since no one expects a mild-mannered disabled person to fight back.