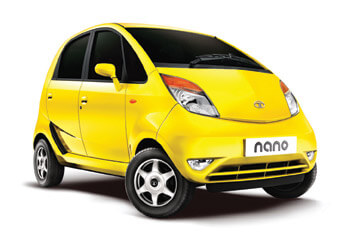 The “people’s car” of the 21st century could spur international development — or wreck the climate. Perhaps both. A look at the tiny car that’s making big waves.

In 1908, a car changed the world. The Ford Model T made personal car ownership a reality for millions of people in the United States, introduced mass motorization to the world, and revolutionized the way cities are planned, spawning the very notion of suburbia.

Now, a century later, another car is poised to do the very same for India. When Tata Motors’ Nano is put on sale later this year it will join the Volkswagen Beetle and British Motor Corp’s Mini in the pantheon of “people’s cars.” While American auto makers struggle to survive, India’s motor industry is set to explode.

Costing just “one lakh,” or 100,000 rupees ($2,600 CDN) — half as much as the next cheapest car, the Maruti 800 — the Nano has been generating buzz and excitement since it was first unveiled a year ago at auto shows in Geneva and Moscow. Set to roll off the production line sometime this year (after the original factory had to be scrapped due to farmers’ protests over dubious appropriation of their land), the car is aimed at India’s rapidly growing middle class, already 50 million strong and set to number 583 million by 2025. Sales of cheap and second hand cars have fallen as millions wait to buy it.

“We have already seen quite a phenomenal increase in the number of personal vehicles on Indian roads, and this is going to bring about an explosion in car numbers,” says Anumita Roychoudhury of the Centre for Science and the Environment in Delhi. “This is a crossroads for us.”

Last year 1.6 million cars were sold in India, and this is projected to grow to 4.6 million in five years. Today there is one car per 142 people in India, compared to almost one car per person in the U.S. India’s Economic Times predicts the Nano could expand the Indian auto market by 65 per cent.

Tata chairman Ratan Tata, wanting his company to be one of the most “admired” in the world, set out to design an affordable and safe alternative to the current preferred mode of transport for most Indians: motorcycles and mopeds. Entire families teetering atop two wheels, sans seat belts, are a common sight on Indian roads.

But getting the price of the car down to one lakh — a feat many deemed impossible — didn’t come without sacrifices. All materials were minimized, every conceivable corner was cut, and every feature deemed extraneous and unnecessary was jettisoned, from the radio to the air conditioner, from the passenger side rear view mirror, to the second windshield wiper. And as Henry Ford revolutionized manufacturing with the assembly lime, the Nano is predicted to do the same with its modular design: the car will be assembled from components built by separate manufacturers and shipped separately, so the car can be sold in kits that can be assembled and serviced by independent, local businesses, which should give another boost to the Indian economy.

Already other auto makers are gearing up to design their own small and affordable cars, including Renault and Nissan, partnering with Bajaj Auto to produce a rival to the Nano for the Indian market. Other small cars are guaranteed to hit other countries in the developing world. If history is anything to go by, the changes will be far-reaching.

“The automobile, and the democratization of technology with affordable cars, has been the greatest generator economic well-being in the western world – absolutely nothing has been more powerful in creating wealth,” says Professor John Heitmann of the University of Dayton, Ohio, an expert on the history of automation. “But what are going to be the possible unintended consequences of going down the route of mass motorization?”

Surging automobile use in India will undoubtedly put further strain on the world’s oil resources. And there’s the obvious issue of climate change: while the Nano will emit far less carbon dioxide than a typical car in the West (just 30 grams per km versus the 160 gram standard in the EU), and gets 22 km per litre mileage (slightly less than the Toyota Prius), the cumulative effect of millions of new cars on the road will be huge. Indians today emit 1.8 tonnes of carbon dioxide per capita per year, and that number is projected to triple by 2020. Compared to Canadians’ hefty 24.3 tonnes of carbon per capita, the Nano is unlikely to put them above our range, but it won’t help, either. A year ago when the Nano was first announced, Rajendra Pachauri, economist and chair of the UN’s Intergovernmental Panel on Climate Change, said the very thought of the Nano was giving him “nightmares.”

The Nano also poses a threat to urban air pollution, traffic congestion, and a lack of incentive for investment in public transportation. Unlike when the Model T arrived in America, Indian cities already suffer from severe traffic congestion.

According to the CSE, Delhi already has 4.5 million cars on the road (and is adding 1,100 every single day). And those cars spend more time idling: the average traffic speed dropped from 27 km per hour in 1997 to 15 km per hour in 2002. In Kolkata, the average speed is just 7 km per hour. In more than half the cities the CSE monitors, air pollution exceeds what is officially classified as critical.

“But even in Delhi, more than 60 per cent of our travel requirements are met by buses, and 33 per cent of people walk to work. Yet personal vehicles occupy more than 75 per cent of the road space,” says Roychoudhury. “It is important for us at this stage of mass motorization to retain the strength we have in public transport” — such as by building more bus lanes and abolishing the tax discrepancies between public and private transport — “and not let a car-centric policy undermine that strength, and have us wind up repeating the mistakes of the western world. Because clearly, car-based mobility does not help us meet the travel needs of the urban majority — and cities should be designed to meet the interests of the urban majority, not the car-owning minority.”

A hundred years ago, after the introduction of the Model T, “we really devalued any notion of mass transit,” says Heitmann. And for good or bad, if the parallels hold with the North American experience, the Nano will bring about a transformation of rural India, not urban. “The Model T really brought about the end of rural isolation in America,” says Heitmann — and that end also marked the beginning of the explosion in highways, and the birth of suburbia.

Heitmann also warns against subtler and more negative effects that Indians would do well to remember. “Materialism became far more important after 1908,” he argues. “The mass motorization of America intensified our individualism and led to a break down of important relationships,” he says. “The kinship ties we once had when we were more rooted in one locale started to break down. We started moving outwards, and this led to all kinds of profound social changes I don’t think we still really appreciate. The American emphasis on rights and flexibility, and the importance of doing one’s own thing, I think, really spun from ‘the ultimate freedom machine.'”