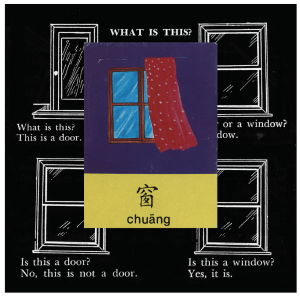 Tucked away in a nook of Vancouver’s Chinatown, the unpretentious location of Paul Wong’s year-long art project draws inspiration from its name. Everyday Things/ is a rotating installation featuring three themed collages, each displayed for four months. Since last September, two images—What is This? and Tools—have been mounted inside a backlit window frame next to the Dr. Sun Yat-Sen Classical Chinese Garden. The third, Human Body Parts, is set to be installed in June.

Each collage consists of a page from English language-learning books from the late 1800s and the 1950s, overlaid by a children’s Chinese flashcard. “If these backlit photographs, for a moment, can make people pay attention to these representations of visual language and words—in particular, English and Chinese—then it’s served its purpose,” says Wong.

The installation is one of four public art projects commissioned by the City of Vancouver last spring as part of an initiative to celebrate Chinatown’s rich heritage and promote the work of local artists. Wong, a prominent multimedia artist, has been creating art in Vancouver for over 45 years.

Wong’s exhibit serves as an ode to Chinatown’s cultural and historical significance, while sparking dialogue about the changing face of the region. Growing up in the 1960s, the Vancouver-based artist attended after-school Chinese classes in Chinatown but never retained the ability to read or write the language. “At the time, we were in a climate that really required full assimilation,” Wong recalls. “There wasn’t much encouragement—in fact, there was probably greater discouragement from the non-Chinese community to learn to read, write, or speak Chinese.”

In the midst of a racist society, Chinatown was a hub of activity and opportunity. “It was the only place where the Chinese could connect as a community,” says Wong. “Vancouver’s Chinatown, for all the Chinese in Western Canada, was the centre where everyone operated through and from and to.”

Today, however, the area’s role is quickly changing, as gentrification and depopulation strip the region of its former buzz. “The soul of old Chinatown is definitely gone,” says Wong. “These projects are kind of alluding to what was and what is rapidly becoming non-existent.” He adds that now, there are newer “Chinatowns everywhere,” referring to the Lower Mainland. “The Chinese have gone way beyond the walls, the confines, the several square blocks of Chinatown and the Downtown Eastside.”

For Wong, today’s culturally accepting climate would not be possible without the existence of the Chinese community. With Everyday Things, he hopes to contribute to a larger body of artwork that draws attention to Canada’s racism. “It’s been a long time coming, these ways of how to address exclusionary, discriminatory past practices,” he says. “I think what it’s doing is actually creating different kinds of work and different kinds of thinking around these ideas of what is public art, what is public space and what is community.”