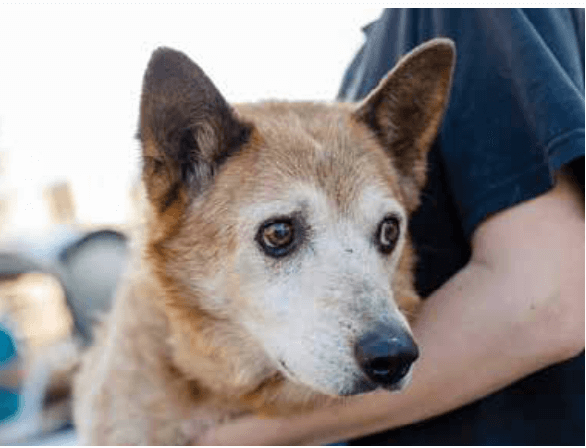 All rescues start with an endearing photo or video: a dog peering through a set of bars wondering what’s next. Rooney’s story was no different. His video showed a partially blind senior dog; a defeated glance at the camera, then a slow turn around to go sit in the back of the filthy kennel. When I watched for the first time, I had no idea that just a few weeks later Rooney would be part of my family and dying on my living room floor.

I run a charity named Redemption Paws that rescues dogs impacted by natural disasters, such as hurricanes, droughts and wildfires. Once a month, I send vans down from Toronto to various parts of the U.S.—primarily Texas, since it has one of the largest homeless dog populations.

Before the volunteers leave, I connect with high-kill shelters and local rescues to identify good dogs in need of good homes. Texas rescue workers like seeing their favorite dogs live their best lives in Canada: Our organization offers the bonus of updating them on all their dogs post-adoption, which motivates them to continue their heart-wrenching work on the front lines. I can’t take “pit bull” type dogs, due to Ontario’s breed specific legislation, and I won’t take dogs that are canine or human aggressive. Those are my only limitations.

Rescue is a balance of resources and goals, and the number one goal is to help as many dogs as possible. The decision- making can get political. Bringing on senior dogs comes with the understanding they’ll take up more financial resources and time. But there was no doubt in our organization that Rooney was going to become a Redemption Paws dog. It’s hard to leave senior dogs that have been discarded, like unwanted TVs, behind bars at pounds.

Many people have a genuine affection for senior dogs, yet they say, “I’d adopt a senior but I just couldn’t afford it.”

Without realizing it, they’re saying: I want the good young years, to justify paying for senior care, or conversely: I’ll love my dog until it’s old and expensive. And maybe that’s how Rooney ended up in a shelter.

When I’d agreed to accept this dog, he was nameless, so I called him Rooney, after his beautiful auburn fur. I remember vividly the first time I saw him, arriving in Toronto on a hot August evening after a 38-hour drive from Texas. Rooney looked wild, like a small red wolf. His brown eyes were subdued, and he seemed resigned to whatever fate awaited him. I made sure he was removed from the van first and seen immediately by a vet. We brought him into the clinic, and he slowly sank to the floor, comforted by the cool concrete.

After examining Rooney, the vet told us this dog needed rest and was much older than we’d anticipated. Back in the U.S., the pound staff had estimated he was around eight to 10 years old and good for a couple more years of love and attention.

In reality he was closer to 15. Rooney struggled in foster care: he fell over when he ate; he had a hard time walking down stairs; he bumped into walls. His fosters were overwhelmed by all his needs and asked for him to be moved. I was hesitant, with this dog being so fragile, but then the vet called to tell me the soreness in Rooney’s leg was not arthritis, but rather an aggressive sarcoma.

Only two weeks earlier I’d made the hard  decision to euthanize my first dog, Charles, a feisty Jack Russell Shih Tzu who’d lived with idiopathic epilepsy. He was 15 years old when he died. I’d adopted him when he was two.

Charles had become ill suddenly. X-rays revealed he was full of tumours, and blood work showed his pancreas was failing.

I agonized over how I’d know when to put him down, and what it meant to give him a good death. I wrote down his three favourite things (eating, playing ball and going on walks) and decided that once he couldn’t do those, I’d know it was time. And I did.

I cancelled the euthanasia appointment twice, before committing to a Saturday evening. Earlier that day, I took him to his favourite forest in Aurora; then my parents fed him expensive Italian cheese at their house; and he played with his brother, Irwin, an 11-year-old Australian cattle dog mix from Kentucky. In the evening, I invited friends over, who knew and loved my dog. We served wine and charcuterie, and Charlie mustered up enough appetite to eat a cheeseburger and ice cream. Charlie loved parties.

Then the vets came in, and Charlie just knew. He hopped into his bed, while Irwin whimpered and circled around him. There was no confusion; Charlie was ready to leave. The vets injected the medication, and I kept my head to his back, waiting to hear his last breath and his last heartbeat. I’d left the back door open, in some hope his energy would flow out into the universe. The sun was shining and warm. It felt right.

Now two weeks later, still reeling from losing Charlie, I watched as my husband carried Rooney into our small apartment. We set Rooney up in a big bed with a towel, and my partner left to run errands. Irwin did not bother Rooney for a second; he lay nearby.

We adopted Rooney, knowing his time left would be short. After he arrived, I cradled this wild-looking red wolf in my arms. His head was soft, his muzzle white, and he had a thick bristly mane. I just hung out with him, talked to him, asked him about his life. And I told him he was safe, a lot. One of our rescue volunteers came over with a tag. It was a big red heart that said ROONEY. With that, he was our dog; he was in our family, and whatever came next, we were in it together.

Barely an hour passed, as we hung out on the floor, before Rooney’s breathing became laboured. His eyes kept growing wider. He was getting ready to pass, and I could feel his struggle to maintain composure. The next steps felt familiar—they were still so fresh. I called the vet. I ordered the cheeseburgers.

And then I opened the back door.

Rooney stopped breathing just long enough to inhale his cheeseburgers. There was a brief moment of unexpected contentment in his eyes. Life was good. Clearly these were not his first cheeseburgers, and I was so glad I was there to give him his last. I told him I loved him, and if he did not have anyone waiting for him on the other side, he could hang out with Charlie and wait for us. His eyes grew wider and wider, and then the vet injected him with a sedative. His expression changed, as though he were watching his whole existence flash before his eyes, and then life left him.

Rooney was in our rescue for five days. He had to travel 2,772 kilometres to Canada just to die a good death. Out of a shelter. Part of a family. With people who loved him and could help him make his final transition with grace. Rooney had won a sombre lottery.

There are millions of discarded dogs that die without cheeseburgers and a soft bed. According to the American Society for the Prevention of Cruelty to Animals, over 670,000 dogs are euthanized in the U.S. each year. Prior to Hurricane Harvey, there were an estimated one million stray dogs in Houston alone. The devastation of the hurricane left even more unfixed dogs homeless in the city. At Montgomery County Animal Shelter, in Texas, people stand in line up to two hours to surrender their unwanted pets.

A livestock mentality persists in the southern states: Abandoning senior and disabled dogs is common because they are seen as not serving a purpose. Some people would simply rather send a sick and dying animal to a shelter than pay for their vet to euthanize it. And now climate change is compounding the problem. People have all but given up trying to manage the street dog population—they know it will inevitably swell again, after the next big storm and mass exodus of humans.

Redemption Paws steps in because we believe in animals’ worth. Humans fail dogs time and time again. By choosing to rescue, foster and adopt, we can choose to help dogs succeed, even as hurricanes blow harder, wildfires burn fiercer, and our planet becomes a harder place to inhabit. In turn, we get unconditional love—down to the very last second—even if it’s just for a couple days.