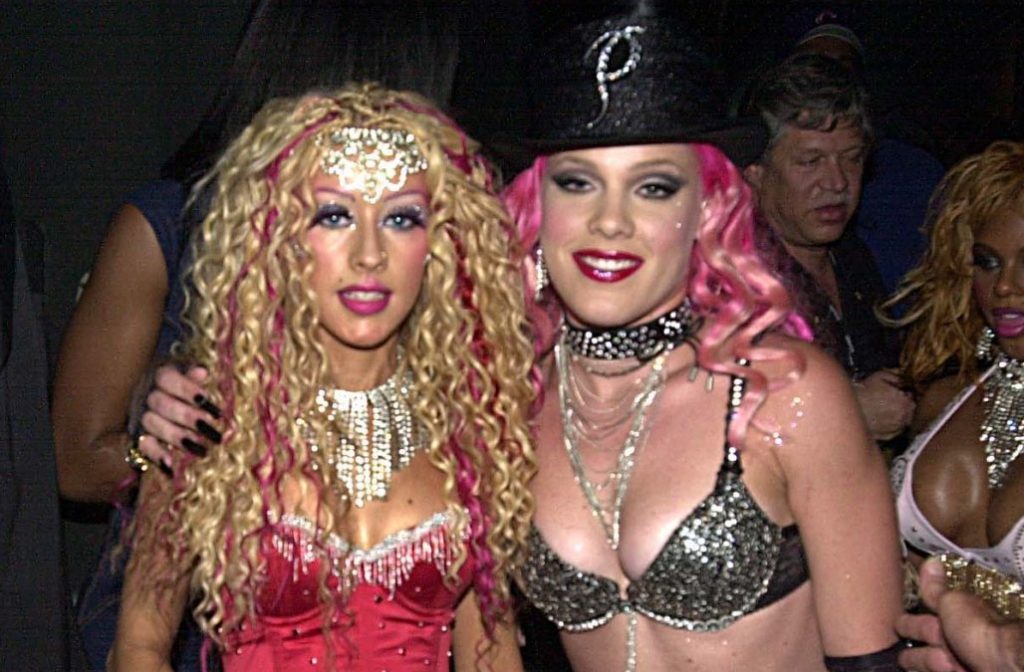 At this month’s American Music Awards, host and Black-ish actress Tracee Ellis Ross said the 45th annual show would focus on “women who take up space.” The awards featured numerous female performers, including Pink hanging off the side of a building, a 25th anniversary salute to The Bodyguard soundtrack (fun fact: the best-selling soundtrack of all time), and a lifetime achievement award for Diana Ross. Despite all that, it was an odd theme for a show with 28 categories, of which only nine featured female nominees.

Unfortunately, in the days that followed the awards, the only thing that took up space was Christina Aguilera and Pink’s supposed beef. “Did Pink Cringe During Christina Aguilera’s AMA performance?” asked US Weekly as a photo circulated on social media of Pink’s facial expression while Aguilera performed a medley of Whitney Houston’s hits from The Bodyguard.

In every outlet from People to CNN, Pink denied the shade accusations while timelines and recaps of their supposed years-long on-and-off-again feud filled social media. Vulture provided a bit of service journalism with their “Stop Trying to Make Pink Versus Christina Aguilera Happen (Again)” plea (someone please send these fine folks an Edible Arrangement). Pink responded to critics, asking them to show the clip where she was in tears over Aguilera’s performance and reminded people the medley was about Houston, not beef.

Women tearing each other apart is a narrative pop culture loves to promote. Shade and side eye have replaced women being supportive of each other. Female feuds have become an awards season staple, like the mani cam or being annoyed by Ryan Seacrest.

At this year’s Emmys, the five actresses from HBO’s Big Little Lies presented an award. They walked out on stage holding hands, all smiles, satin, and solidarity. When Nicole Kidman and Laura Dern took home Emmys for their roles on the show, Reese Witherspoon beamed with pride and held back tears. Kidman and Dern’s acceptance speeches talked about the lack of interesting roles for women in Hollywood and how women need to take matters into their own hands for change to happen. They talked about supportive women and how awesome moms are. There was not a Tracy Flick in sight.

A few days after the awards, the predictable internet backlash began. Everyone from Marie Claire to People tried to suggest that, unlike Kidman’s Oscar dress this year, all was not peachy. Did Dern snub Witherspoon by forgetting to hug her? Were Witherspoon and Kidman battling on stage over who would hold the Emmy when the show won for best limited series? Close-up photos of Witherspoon’s hands were provided as evidence she was “yanking” the award away from Kidman. Was all the support just for show?

A few weeks before the Emmys, MTV held its own awards. The MTV VMAs are certainly not the Emmys—think dancing Hannah Montana instead of dancing Handmaids. Katy Perry was hosting this year’s show, and although her former friend and current nemesis Taylor Swift, a past VMA winner, would not be in attendance, she would be premiering her new video during the awards.

Swift’s absence didn’t stop journalists from salivating all over their keyboards at the thought of a showdown between her and Perry. In the weeks leading up to the awards, timelines and listicles appeared rehashing the history of their feud one painful tweet at a time. To add to the awards drama, Miley Cyrus and Nicki Minaj would also be in attendance. Cyrus has feuded with Swift. Minaj has feuded with Swift. Imma’ let you finish Googling “Taylor Swift feud history” before we continue so you can catch up on all the bad blood.

The fact that the some of the feuds were ancient history or lasted less time than a Perry costume change doesn’t matter. We were once again reminded that when it comes to collaboration between female performers, drama is the only art they can make. Google search Katy Perry and one of the first things that comes up is a Rolling Stone article titled, “Katy Perry Vs. Taylor Swift: Pop Stars’ Beef History Explained.” Entire column inches are devoted to analyzing both stars’ song lyrics for the slightest hint of shade and frame-by-frame recaps of their videos to determine who is trashing whom.

It was sad to see so much of the VMA press and show devoted to ladies trashing ladies—especially when the night featured a touching speech from MTV Video Vanguard winner Pink about self-acceptance and tolerance. This year’s VMAs saw an increase in younger viewers (12-24), in addition to the show being the number one trending topic on Twitter in the U.S. that night—not an easy feat when you are up against a Game of Thrones season finale. Hopefully, the young girls watching focussed on Pink’s message, not the female feuds.

It’s hard to figure out if these fights are legitimate or whether, sadly, female performers have been conditioned to believe that they need to be at each other’s throats to get attention and stay in the spotlight. As if they won’t get any press if they’re not functioning like the musical equivalent of the Plastics at all times. It’s hard to take fights over back-up dancers or John Mayer (relax ladies, everyone’s body can be a wonderland), what Swift and Perry were apparently beefing about, seriously. Minaj and Swift’s feud started after Minaj tweeted about a lack of diversity in VMA nominations—something worth fighting about, just maybe not with each other.

It might be easy to write off the media’s obsession with pitting women against each other as something reserved for young pop princesses, until you remember how long Jennifer Aniston and Angelina Jolie have been duking it out in the pages of US Weekly—over a man. It has been more than 12 years since Aniston and Brad Pitt divorced. Twelve! And it’s not just Aniston and Jolie. The cover of the latest issue of Life & Style informs me that Gwen Stefani and Miranda Lambert are feuding. Guess there is just not enough of People’s Sexiest Man of the Year to go around (is there a barf bag to go around?).

We rarely hear about male celebrities feuding. When we do, the story leaves the news cycle very quickly. Men criticizing other men is regarded as a strength that doesn’t detract from their artistic output. Their feedback is portrayed as respectful, measured, and constructive, compared to the tearing each other down tone reserved for coverage of women.

If women aren’t fighting, they are always on the verge of a showdown. “Are Jennifer Lawrence and Amy Schumer still friends?” asked E! News. The writer worried that they haven’t been spotted together recently, which totally must mean they aren’t besties anymore (Maybe Schumer saw Mother?). You can see In Touch getting giddy at the thought of a falling out and the newsstand gold it could garner.

Who is in Swift’s squad? Who is out? How many friendship bracelets did Swift give out at the recent Victoria’s Secret fashion show? The woman is collecting more models than Leonardo DiCaprio. While the United States goes to hell, reporters spend their time analyzing Swift’s Instagram photos to see who was at her recent sleepover. I never see headlines asking: Are Matt Damon and Ben Affleck still tight? Or are Justin Timberlake and Jimmy Fallon okay? Men get the bromance treatment while friendships between female friends are always hanging by a thread.

From “Who wore it best?” to “Best and worst beach bodies,” pop culture’s sexism reinforces the attitude that “catfights” are the only interesting thing about women. We need more stories about women supporting women and encouraging each other. And we need more reporting on the fights that really matter, like Minaj’s tweets about lack of VMA diversity or a focus on Lawrence’s Lenny essay on the gender wage gap in Hollywood, instead of who is number one in her speed dial.

In her recent book What Happened, Hillary Clinton talks about the lack of women that voted for her and the idea that women don’t stick together and support one another. People accuse her of blaming the media. She just might be right.